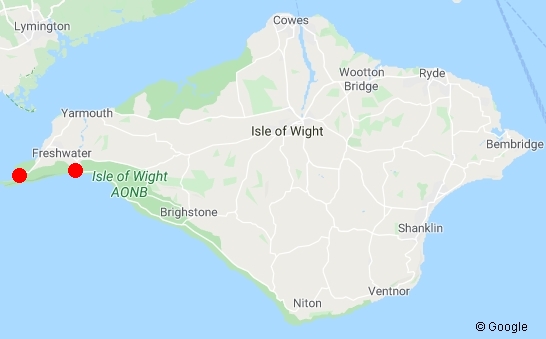 Walk from Freshwater Bay on Tennyson Down to The Needles. Be warned – there are some steep climbs in places on this walk! This was where Tennyson walked on a daily basis (no wonder he lived to a good age!) He claimed that the air was worth “sixpence a pint”.  Not only was the ‘High Down’ renamed after his death, but the 38’ Cornish granite cross (Tennyson Monument) was erected in his honour at the top. We will walk up to this, after briefly showing you some of the houses in the Bay associated with Tennyson and his Circle. From the top of the Downs you will have spectacular views over The Solent to one side and The English Channel to the other - on a clear day seeing as far as Swanage and Old Harry Rocks on the Dorset coast. Tennyson composed some of his best work while walking here, including ‘The Charge of the Light Brigade’.

Wildlife lovers should look out for cormorants, guillemots, peregrines, ravens and jackdaws nesting on the cliffs. Puffins once nested here, but sadly no more. You may also see a selection of butterflies, including Darkgreen Fritillaries, Chalkhill and Adonis Blues.

We will walk the one and a half miles to The Needles (chalk stacks at the extreme westerly tip of the Island with the iconic red/white striped lighthouse and the beautiful coloured sandstone cliffs of Alum Bay).

Geologists and non-geologists alike can’t fail to be impressed! It is apt that Robert Hooke (who invented the science of geology) was born just a stone’s throw away. You will observe the most amazing geological features close at hand. Tennyson himself not only studied, but was hugely passionate about the Island’s geology.

You will also see Victorian Fortifications - primarily The New Battery at The Needles, which was used in both World Wars, but the guns were finally removed for scrap in 1954. This is also the former site of the 1950s Rocket Testing Station – the only one in the country. Whilst it is unfortunately no longer in existence, you will be able to view the small exhibition which is now in its place. The Old Battery is a military fort commissioned by Lord Palmerston in 1862 to protect The Solent from a French invasion which, in fact, never came. You will also see Fort Albert from a distance on the walk.

Next to The Needles viewing platform you will see a commemorative memorial to Marconi, who made his first wireless transmission across open water from Alum Bay in 1897.

You may wish to end your tour here, in which case we can arrange transport back (or bus). OR you can walk back to Freshwater Bay. Various refreshment options are available on this walk – at Warren Farm (Totland Bay), or at The Needles, or at either The Piano Café or Dimbola in Freshwater Bay.