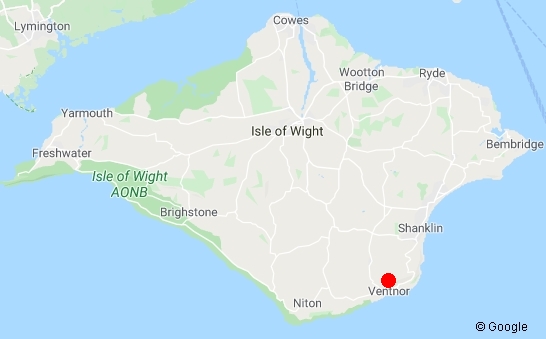 Ventnor started life as somewhere Victorian Londoners could escape to. It offered glorious sunshine and clean, fresh air – a world away from the poisonous air of the capital. They also came to seek a cure for tuberculosis and other respiratory diseases.

Ventnor is the Island’s hilliest area and provides spectacular views. Known in the Victorian era as ‘England’s Madeira’, it enjoys a micro-climate which was discovered in the 18th century.

Its benefits were recognised by a few doctors (one of them, physician to Queen Victoria herself). Thereafter, the place developed as a ‘health resort’. This resulted in the building of what would later become ‘The Royal National Hospital for Diseases of the Chest’ – in existence for 100 years.

The surrounding trappings of health included a network of private doctors and nurses and hot and cold bath houses and bathing machines. Karl Marx was one of the better-known patients of one of these doctors.

We walk you through the town centre (expect some hills). After wending our way downwards, we proceed along the seafront and pass several well-known landmarks. As well as learning about the town’s health connections, we will tell you plenty more besides.

We include several pitstop opportunities: from a variety of freshly caught fish from Ventnor Haven Fishery through to maybe a lovely cream- or afternoon tea at the elegant Royal Hotel (Ventnor has arguably the best eateries on the Island!).

We then continue to Ventnor Botanic Garden, allowing you the opportunity to pay a visit if you wish.

Its car park is the site of the former TB Hospital, where you are welcome to end your tour. From here, it is just a short walk (or ride) back into town.

However, The Gardens are spectacular and you very likely won’t want to miss them. Second nationally to London’s Kew Gardens, Ventnor’s microclimate has clearly lent a helping hand! (Admission charges apply).

Alternatively – if you are fans of pre-Raphaelite art, you may prefer to take a short walk to see fabulous stained glass windows by William Morris, Burne Jones and Ford Maddox Brown. Formerly housed in the hospital chapel on this site, they were subsequently relocated to nearby St. Lawrence Parish Church.

Another either/or (or as well as!) is to stroll down to Steephill Cove (yes – it IS steep!) But this is a ‘must-see’ insider tip!

Are you a fan of crab? In which case, the famous, melt-in-the-mouth Ventnor crab pasties (healthy? – definitely😊), made by The Crab Shed, make the walk down and back up again more than worthwhile! Just these, even without the additional delights of this stunning little cove!